Dan and I spent the last three sessions modelling all the elements of the game, deciding what shape they’ll be. Here’s an image with the elements in roughly the right places as you’d see in a game. This isn’t a real level, we just put the pieces together, and they need to have colors and artwork attached yet. 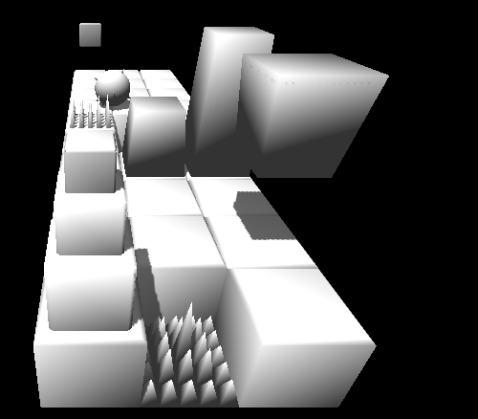 Dan spent some time figuring out the words to use in his game today, and looking on a website to find all the smaller words that use the same letters. This is the list of 30 words that will make it into the game. Some of the words are more difficult or easy, and Dan made sure there were some of each in every group.

It was naming and branding time today. And I can reveal that this year’s game is called:

The dangly lines are strings, which Dan wants to hang letters from in the game. We looked at a whole bunch of logos involving speed, and Daniel decided that italic red text with action lines was the way to go (quite similar to last year’s logo).

We had our ‘launch meeting’ today, where we talked about ideas for the game.

Dan was keen to do an “endless runner” game in the style of Temple Run, and lots of other games he loves on his iPod Touch. So we had a good chat about cloning and the way that once one good game comes out there are lots and lots of games that just copy it. Dan decided he didn’t just want to make a direct copy of Temple Run, so we looked for ways the game could be completely different, even if it used some of the same obstacle dodging mechanics.

He came up with the idea of having chunks of running followed by word-puzzles, which unlocked the next section. I suggested he come up with ways to make the running sections be more integrated with the word puzzles, so it wasn’t two different games put together. He suggested that, as you run, you pick up the letters you need, then have to make a word at the end to continue. He suggested that if the word was FOUR, and you missed the F, you could continue, because you can make OUR, but you’d have fewer points. I’m really proud of his design, I think it has a bunch of neat properties.

We then discussed scoring, as he is very math oriented. He wanted to add double-word-score and triple-word-score powerups (he plays scrabble with us, so the connection was obvious), and then suggested we have a ‘minus-word-score’. After I explained negative multiplication to him (which he got pretty much immediately), he figured out that, if you pick up a minus-word-score you’d want to make the smallest word at the end of the level: to lose the least points, an excellent inversion of the strategy. Over dinner he figured out that two minus tiles would take you back into positive territory again. So we have the basis of a scoring system.

We also discussed the aesthetic, but we'll be coming back to that tomorrow, so more details then.

All in all an excellent and long afternoon, culminating in a very geeky meal. Game Summer III is off to an exciting start, and Dan is very pleased with himself.

Sorry things went a bit quiet over the summer. We carried on working on the game, but it was a very busy summer, so there wasn’t much chance for blog updates. 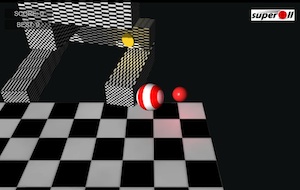 Anyway a couple of weekends ago, Dan finished off the game, and today I finished the little tweaks he asked me to make. So you can now play the game. Click on the image above.

You’ll need the Unity web player, but if you don’t have it, the page should walk you through installing it.

Dan spent today getting more used to the tool, moving things around, creating new objects and playing through to see if the level worked.

This is the result. A first level (though Dan was at pains to point out that it is too hard to be the ‘first’ level). 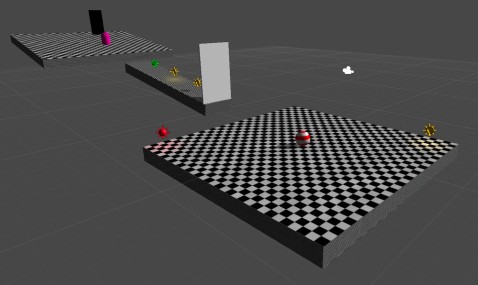 You need the door gem to get on the ramp. The gem (red) is right on the corner of the platform so you need to be careful. On the ramp is a boost (green), which makes it easy to do the final large jump to the third platform. But you have to not go too fast, because the buffer (pink) is in line with the exit, so you need to go around it. Three coins on the level give you an extra point boost. Dan’s top score is 16 on this level so far, mine is 14.

I’ve been impressed with how easy Dan is finding Unity. Switching between overhead and side view, changing tools, adding new items. Really is fun to watch. And this level is pretty good fun to play.

Next thing we need to get rid of some of these out-of-the-box graphics, particularly the checkerboard platforms, I think.

We worked on the logo for the game today.

Dan typed the name and chose the font. It looks like it is moving, he said.

I said that sometimes designers change a letter to be a drawing, and Dan said “we could change the O into a ball!”.

We’d talked about movement lines to make something look like it is going fast, so those were added. And the shadow was my little trick: “Cool” said Dan! “It looks Japanese.” said Mel. 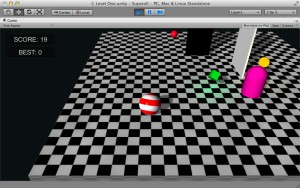 This year I wanted to have the game playable earlier. Last year we spent too much time on the art up front, so Dan got a little bored towards the end of the holidays, not being able to play his game. In the end, we ran out of steam, and didn’t finish until Spring. This year, with the move to 3D, we’re working in Unity, so I could get a playable version of the code working in an evening. That means Dan can actually see and play the changes as he makes them, which is much better.

As a consequence, progress is slow, because Dan has to thoroughly play-test each change!

In the screenshot above (click to see it larger) you can see the bare bones of Dan’s design. The ball is resting on a platform. The red floating sphere is a ‘door gem’ and the white rectangle is the door – if you collect the gem, the door opens. The yellow disk is a coin, the green cube is a boost power-up. The purple thing is a ‘buffer’ which knocks you back. The black rectangle is the exit. We will work on refining the look of these later: at the moment they are just the basic shapes that we could add with one click. The scoring system Dan designed works nicely: with the score counting down and being increased by coins.

Dan spent yesterday refining the sizes of things: learning to use Unity to make the door taller (so it can’t be jumped over) and to add lights to the pickups (you can see the green cube is casting a green glow on the ground). There’s also a second platform not visible in this shot, which he positioned and changed the angle of, so it has a slope. Dan took to Unity like a pro, and quickly understood the idea of adding components to alter an object.

Today, Dan worked on sound effects. Like last year, we used the excellent Cxfr to create brand new sound effects for the three types of pickup, for touching the buffer, for falling, for jumping, and for finishing the level. This year Dan is much more proficient at reading, so was able to play with the sound effects: altering their frequency, their slide and their envelope. 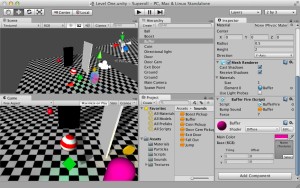 He was also able to read enough to manipulate Unity’s rather complex interface to get the sound effects playing on the correct object. My aim for this summer is to get Dan using Unity quite fluidly. I’ll still be writing the code, but I’m sure he’ll be able to create objects, add components, tweak important settings, lay out the level and test his game.

After play-testing, he decided a couple of the sounds didn’t sound good, so he reworked them. Finally the ‘finish the level’ sound still wasn’t right, so we went online and searched for a more triumphant sound.

Dan is enjoying playing the bare bones of his game, and I’m enjoying the fact that using Unity means the code is basically written already!

We’ll probably work on a logo next, and add that to the screen, and then he wants to work on making a full level with more coins, buffers and platforms in it.

Its hard to believe its been a year since we started Cave Saver! It is the first day of the summer holidays for Dan, and we’ve started our game project for 2013.

We’ve been talking through ideas for a while. Dan liked the idea of rolling a ball, which he enjoyed from levels of Super Mario Galaxy and the two Super Monkey Ball games he’s got. Also a big priority for him this year was to do a 3D game. 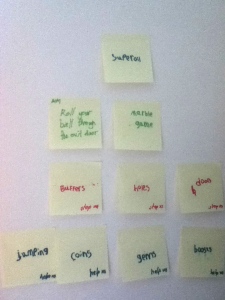 We had a big conversation about the amount of work it takes to make 3D graphics and the fact that we’d have to pick a simpler game idea to make it work in time. So no cute jumping frogs this year, I’m afraid. Expect more plain geometric shapes! It will be a good excuse to get him using 3D software though.

The idea is based on Super Monkey Ball: you have to roll a ball across platforms to an exit door. There are obstacles in your way such as buffers (pinball style), holes and locked doors. You collect coins for points, and gems to open doors (for some reason – I figure the game is pretty abstract, so let’s roll with it). Power-ups give you extra speed, and you can jump the ball up a little.

We also have a long b-list of features that would be nice to have, if we get time (which I suspect we won’t, but still!)

Dan devised a neat scoring system: you’ll start with some points, but lose a point every couple of seconds. You get extra points by collecting coins, but if you fall off and have to go back to the start, the coins don’t reappear. It is neat because it balances a kind of time limit and score attack in one go. We had a great conversation about whether it would be good to make the level harder if the player was too slow, and how punishing weaker players isn’t a good idea.

So here’s the game design wall. Simpler than last year, but still some neat ideas.

After stalling at the end of the summer, we came back in the spring with a flurry of finishing off. You can check out Dan explaining his game here:

This is the site that chronicles our Summer project. Dan is a seven-year old gamer who wants to make his own games. Dad is a game developer who is helping make it happen.

We spend about 30 minutes to an hour each day for the six week summer holidays.